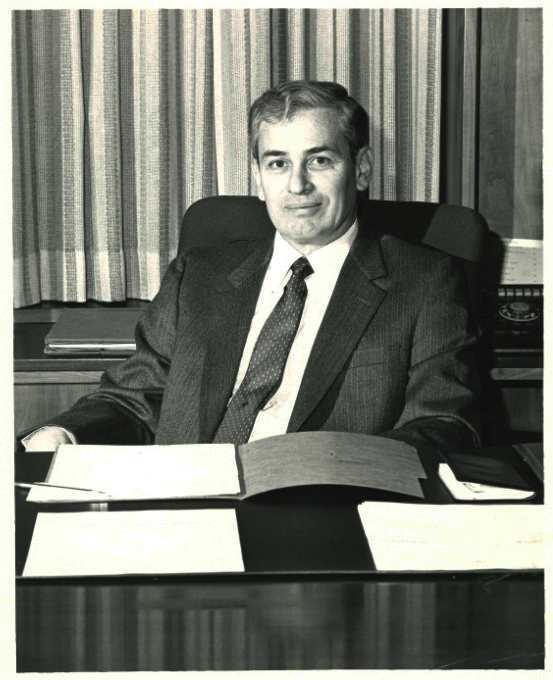 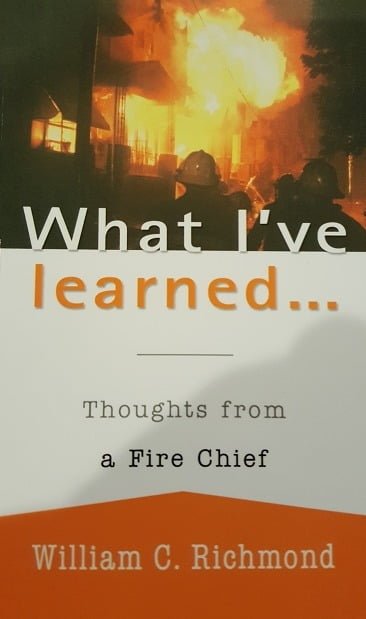 What I’ve Learned
By William C. Richmond
Available in the museum store

This began his interest in firefighting and in 1960 he transferred into the PFD. Following his training, he was assigned to Engine 33. Wanting more experience he soon transferred to Engine Company #2, the city’s most active station and drove Engine 2’s pumper as they raced to the Fretz Fire.

He progressed through the department ranks being promoted to Lieutenant and then Captain. He worked at the Fire Academy as an instructor and then moved on to Ladder 14. He then transferred to the Research and Planning Unit where he helped develop the polycarbonate helmet a revolutionary design for its time. Commissioner Richmond felt a strong connection to Fireman’s Hall Museum stating early in his tenure as Commissioner, “I am a firm believer in the history and traditions of the Philadelphia Fire Department, and for any movement that will preserve them. We must maintain a close association with the past, and we will do what we can to foster the concept of the “Old” as it is preserved for future generations in FIREMAN’S HALL.” Commissioner Richmond wrote and published “What I’ve Learned, Thoughts from a Fire Chief.” Available for purchase in the museum store.

Commissioner Richmond passed away on June 25, 2018. In keeping with his love of the history of the PFD several donors have come together to support this new digital web gallery which will rotate images from the archives from Fireman’s Hall Museum. It will be known as the William C. Richmond Gallery.

This project is made possible by the support of Marrazzo/Greenwood family.

Faces of the Philadelphia Fire Department from the Burns Collection 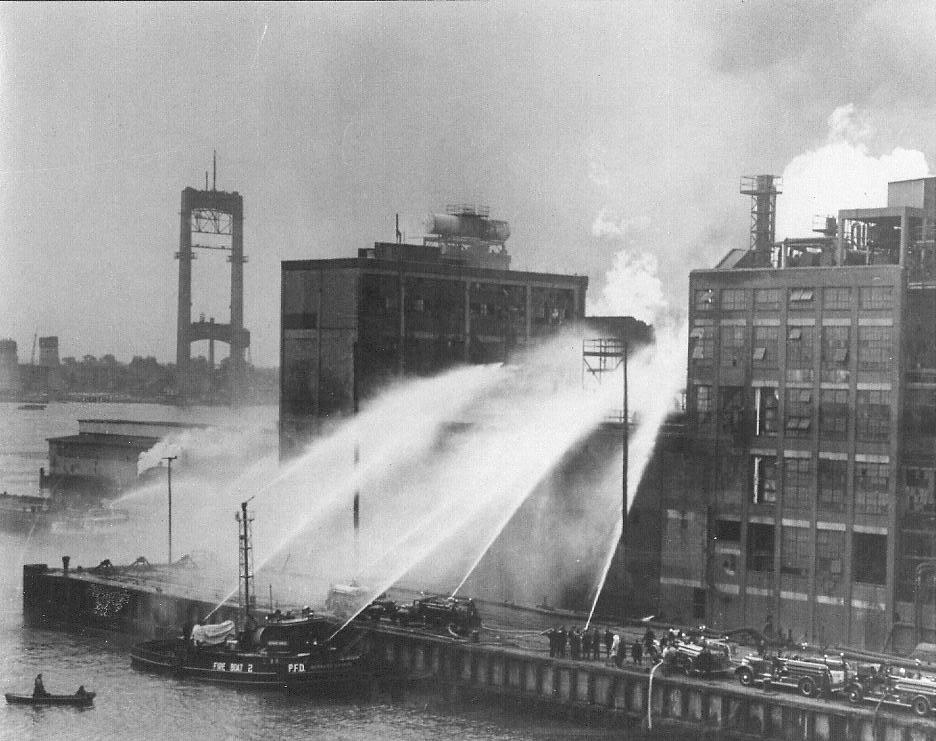 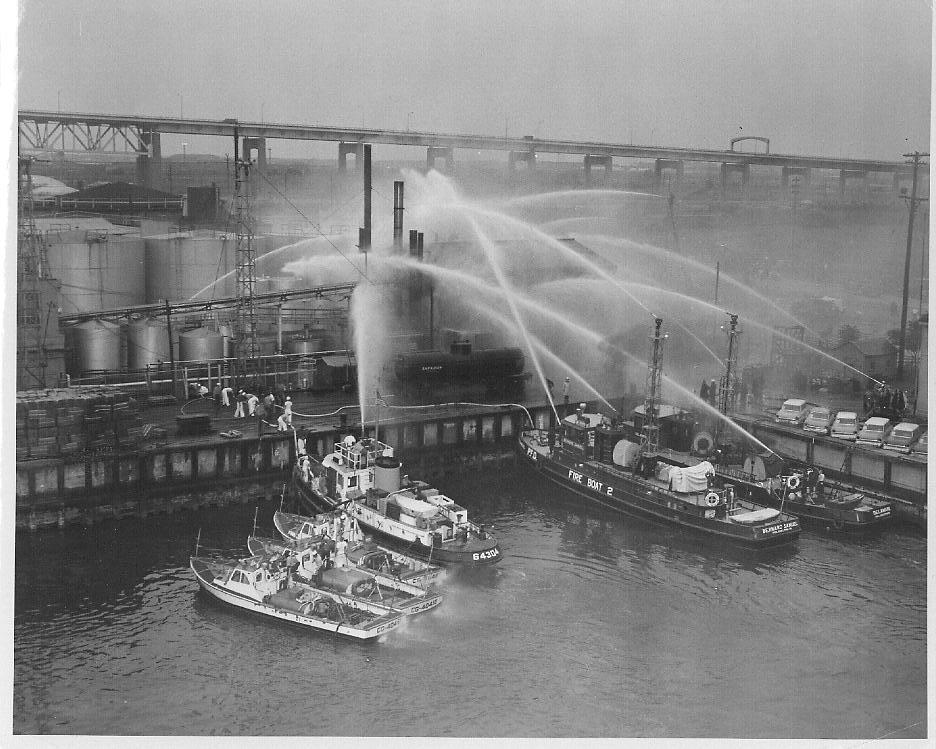 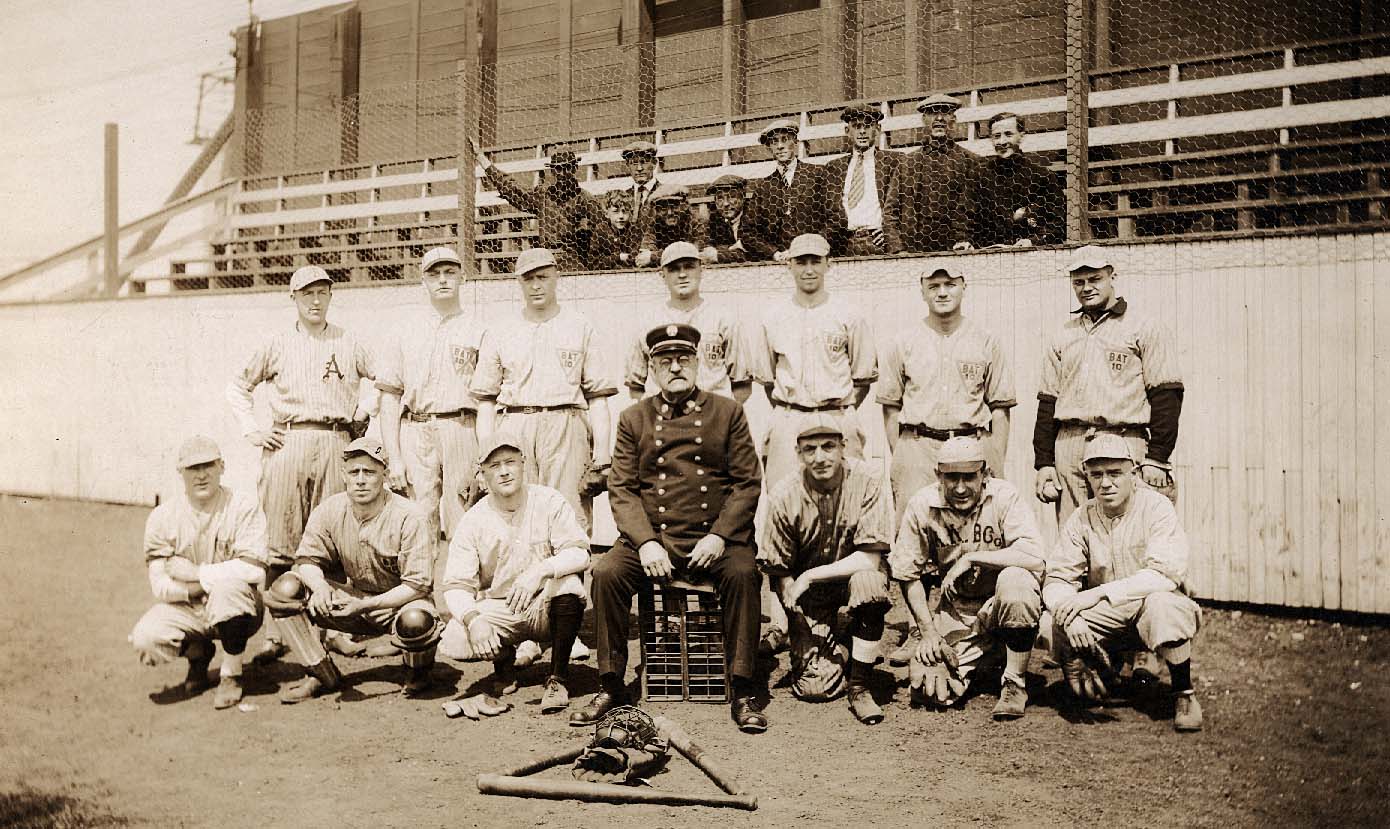 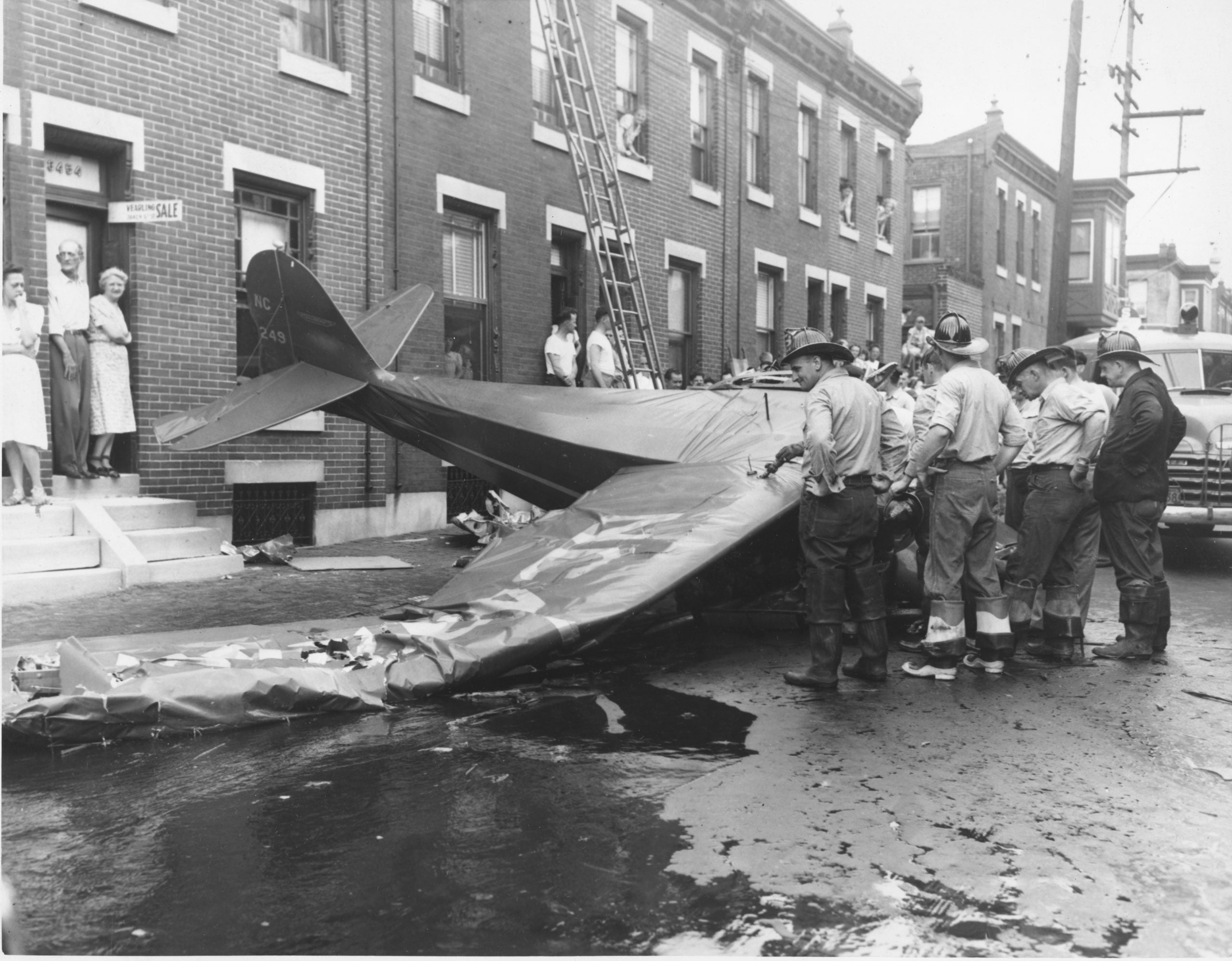 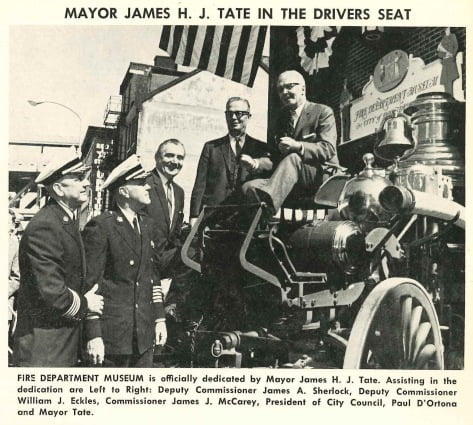 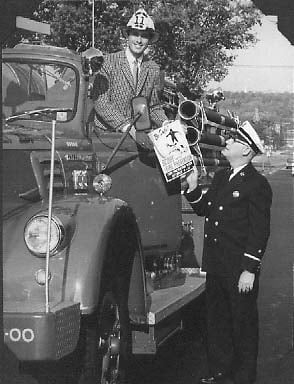 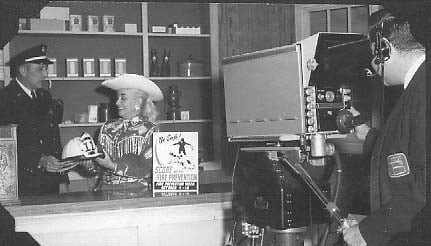 Fire Prevention was always an important part of the PFD. Here Engine 16 gets the message out with the help of WCAU TV 10, Sally Starr and Gene London in the late 1950s or early 1960s.  Photographs from the Robert Burns collection. 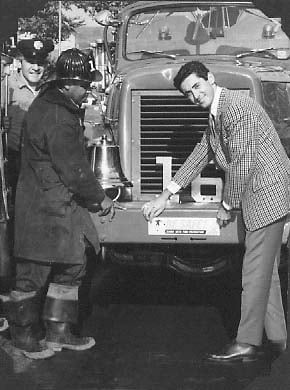 The Philadelphia Phillies day game today reminded us of the many great photos we have of Philadelphia firefighters enjoying America’s past time. These photos, taken from the Robert Burns collection, show Battalion 11 on and off the field. 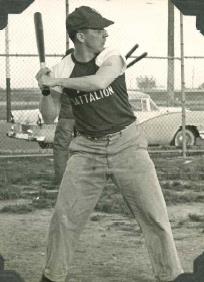 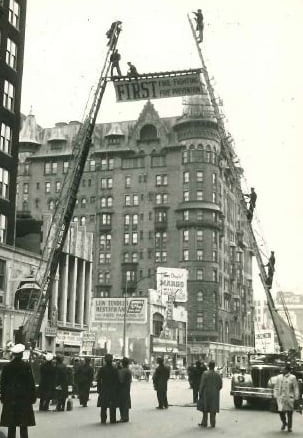 June 25, 2019
Now this is taking the fire prevention message to new heights! From the Robert Burns collection. 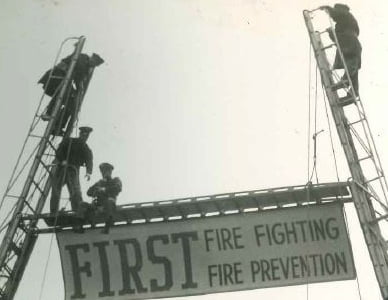 Early fire prevention promotion efforts by the PFD included an assist from the Beatles during their first stop in Philadelphia for a concert at JFK Stadium on August 16, 1966. 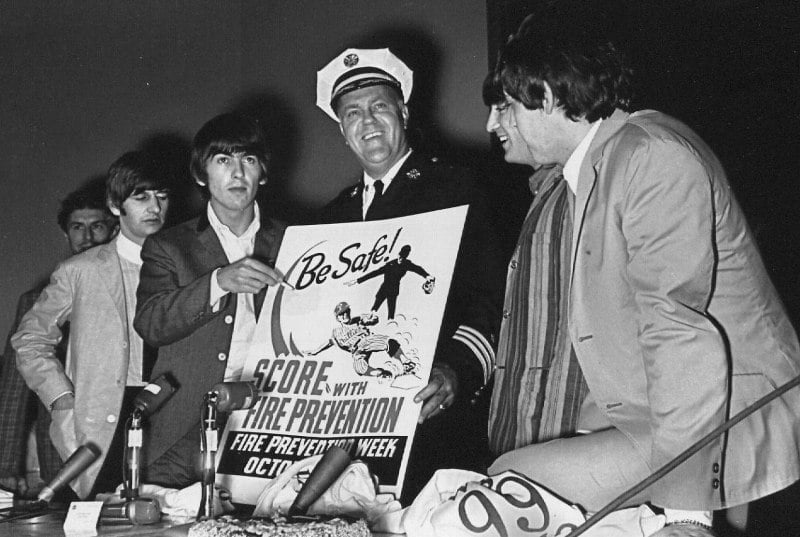 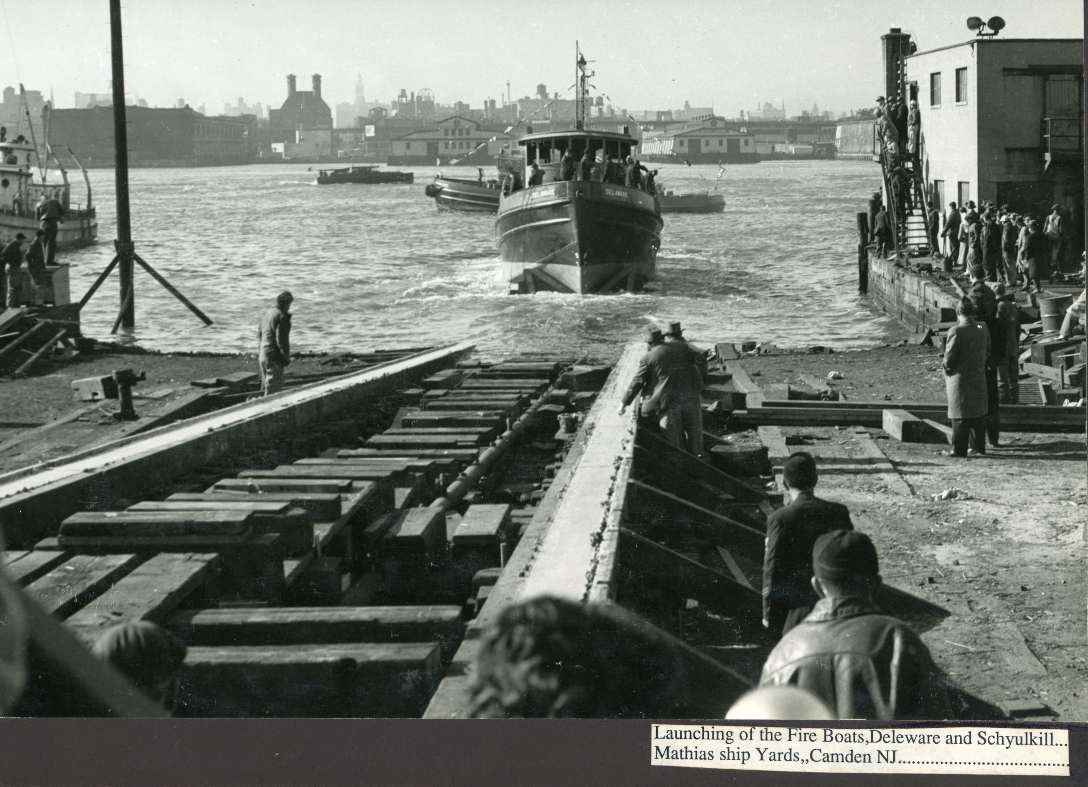 The high-pressure system which went into effect in 1902 was in service until 2005.  Shown here are the fireboats charging the system and the bulkhead at the foot of Race Street.  The High Pressure station was at Delaware and Race, now the home of Fringe Arts. 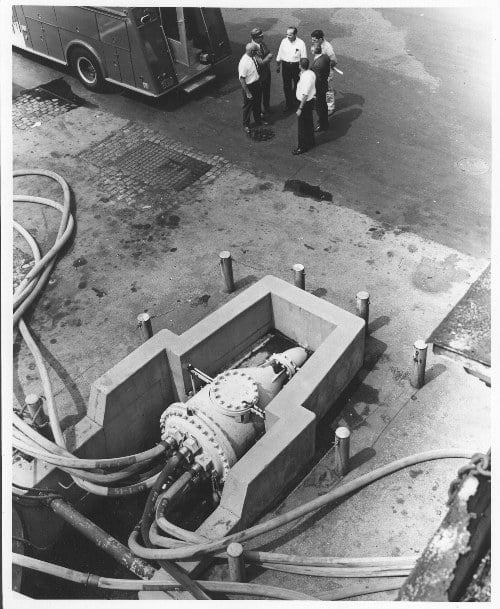 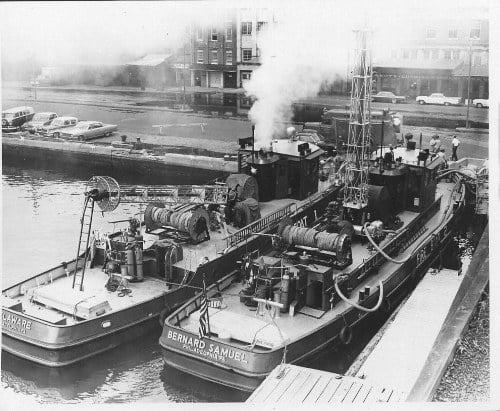 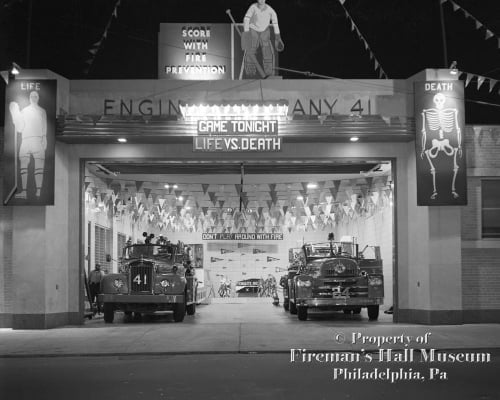 Last Horses in the Philadelphia Fire Department
The last companies to run with horses were Chemical 1&3. On December 29, 1927 the last two teams (Jack & Dick and Buck & Dick) made their last run. It was a ceremonial run past the department headquarters. Many city officials and firemen attended. But this was not the end. The two teams participated in the Mummers Parade on January 1, 1928, after which they were turned over to the SPCA which put the four horses out to pasture to retire. 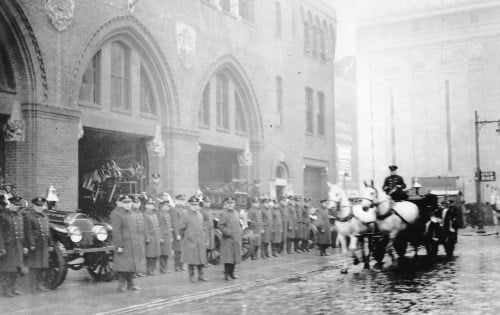 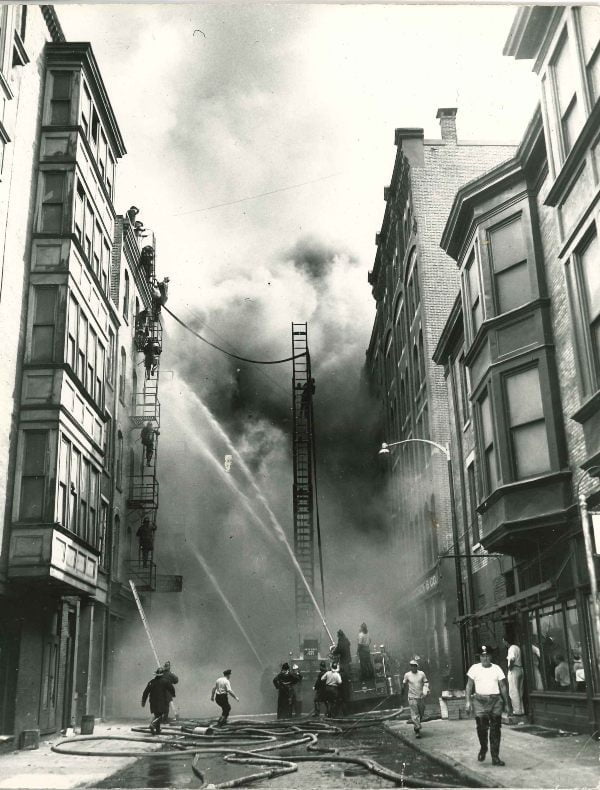 Imperial Bag Company Fire, August 21, 1953
Four-alarm fire at 14 S. Front Street, Philadelphia, PA
Some of our photographs require detective work to identify – this one was uncovered by our long-time photograph volunteer, Len Ottenbreit.

Santa climbing into the window of Gimbels on Thanksgiving Day with the help of the PFD. 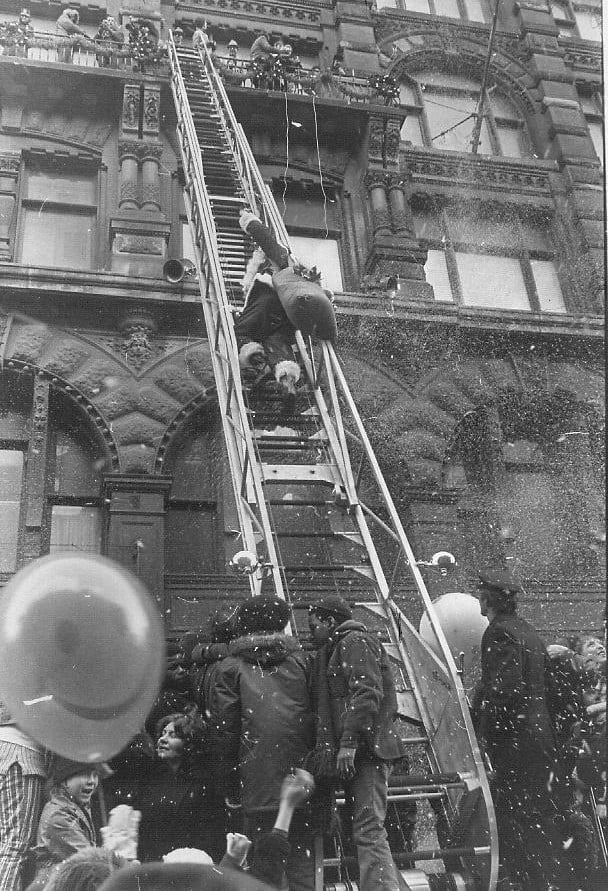 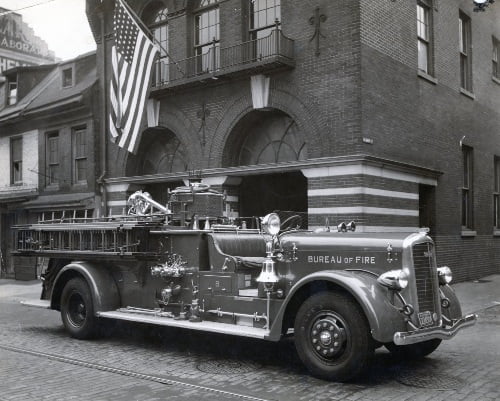 In honor of Engine 8 going back into service in December 2019, we thought we would share a photo of the old Engine 8 now Fireman’s Hall Museum. 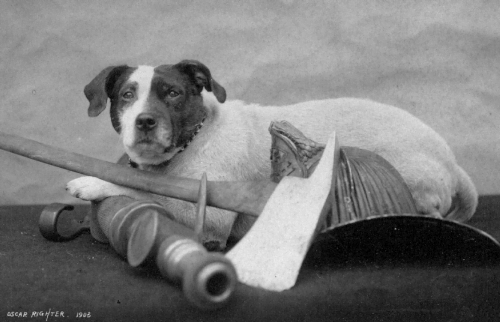 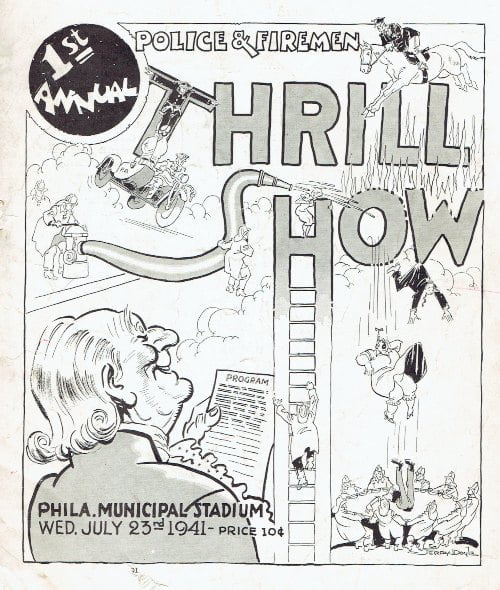 Blast from the past! Here’s the cover of the 1st Annual Police & Firemen Thrill Show booklet. The first show was held on July 23, 1941 and held at Philadelphia Municipal Stadium. The admission was 10¢. 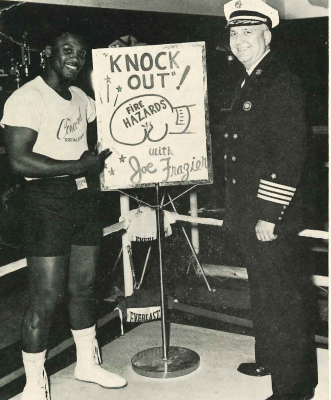