Ross B. Davis was appointed to Engine 27 on March 9, 1895. Promoted to Assistant Foreman on January 24, 1901, he was transferred to Engine 46 at Water and Reed Streets. Davis was promoted to Foreman on February 1, 1906 and assigned to Engine 8. On August 3, 1908, Davis was transferred to Engine 27 as the Foreman. Ross B. Davis would eventually rise to the rank of Chief Engineer on December 23, 1920. He retired from the Bureau of Fire on January 1, 1941. During his tenure as Chief Engineer, he would complete motorization of the Bureau and open a number of new companies in areas of the city experiencing population growth. His plans to expand the department would be stymied by the Great Depression. He would also become embroiled in political in-fighting that would hinder his management of the Bureau. 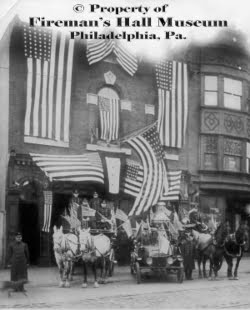 Photo taken during World War I. The banner in the middle, with five stars, indicates five members of Engine 27 were away in the military serving their country. Gold stars on the banner indicated one of the servicemen were killed in action.