His climb through the ranks started nearly 30 years earlier. He began his career with the department on June 3, 1974 as he was sworn in as a cadet in the 143rd training class. Later that year he graduated 5th in his class. He spent the next ten years as a firefighter. On February 25, 1985 he was promoted to Lieutenant. He quickly rose to Captain on June 22, 1987, then Battalion Chief on December 22, 1989. On April 3, 2000 Chief Ayers was promoted to Deputy Chief. Later that day Deputy Chief Ayers was appointed to the position of Deputy Commissioner of Technical Services. Then on July 30, 2001 he was appointed Deputy Commissioner of Operations. On August 1, 2004, two days after Commissioner Harold Hairston retired, Ayers was appointed Acting Commissioner. Four months later his position was made permanent.

During his tenure, Commissioner Ayers oversaw the massive overhaul of the 800mgh communication system. He also facilitated the installation of computer terminals (Mobil Data Terminals) in Engine and Ladders companies. This effort enhanced the relay of information to responding companies. He was also responsible for initiating the Community Risk Reduction Program. Commissioner Ayers expanded the Home Smoke Alarm Program by including smoke alarms for the hearing impaired. During his term as commissioner, Philadelphia Heavy Rescue Company became part of FEMA Task Force One Search and Rescue Team. In 2011, the Philadelphia Fire Department was designated the Command Unit of FEMA Task Force One.

Commissioner Ayers served the city during a period of financial troubles. He was constantly fighting budget cutbacks. He initiated “rolling brownouts.” Several companies would be closed for a given shift. Members would to be sent to other companies to fill vacancies. This effort allowed him to keep firefighters employed assuring that no laid off’s would be needed. At the time, this was a very controversial program but no firefighters lost their positions due to budget problems.

As with his predecessors, fire prevention was a major priority. As a result of his efforts, civilian fire deaths were reduced dramatically.

Commission Lloyd Ayers retired on June 14, 2014 after 40 years of service to the city of Philadelphia. He continues to serve several local civic groups. 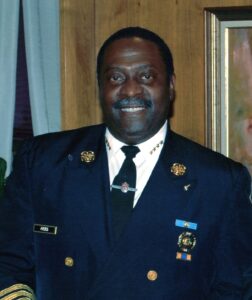 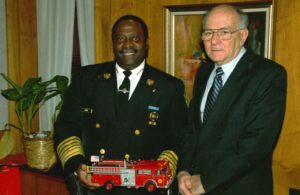 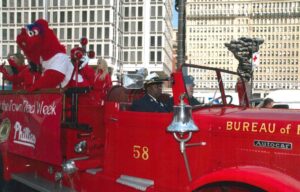