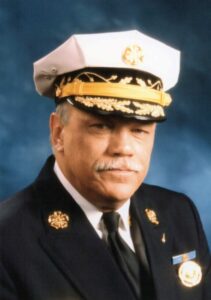 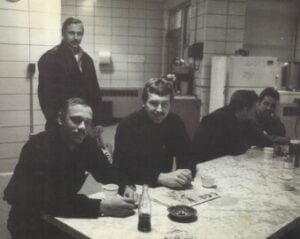 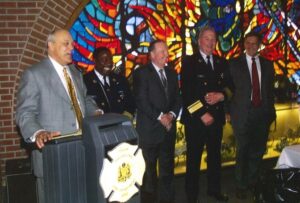 As Battalion Chief he headed the ninth and then the eleventh battalions. Hairston was assigned to the Command Inspections Unit and then became the Assistant Fire Marshall. Hairston continued to climb the ranks and on June 30, 1986, achieved the rank of Deputy Chief. Two years later, on January 4, 1988 he was appointed Deputy Commissioner. On January 6, 1992 he was appointed to the newly created position of Fires Deputy Commissioner.

In June of 1992, Commissioner Roger Ulshafer retired. Hairston was appointed Fire Commissioner by Mayor Ed Rendell. Commissioner Hairston became the first African American to lead the Philadelphia Fire Department. He would hold this position for the next twelve years.

In the early nineties, fire deaths were at an all-time high in Philadelphia. To combat this alarming situation, Commissioner Hairston initiated several programs. Adopt a School, was an ambitious program whereby a fire station would adopt a local school and conduct fire safety and fire prevention programs on-site and at the firehouse. Another was the Home Inspection Program. Residents would schedule home inspections, and fire company members would visit and access the risk of fire by pointing out unsafe items. Most of the fire deaths of this era were in homes that didn’t have smoke alarms. Commissioner Hairston enlisted the help of the business community to donate smoke alarms and installation was completed by fire companies. He also sought grants to finance the program. These programs, along with fire prevention public service spots on TV and radio, had a very positive effect. The number of deaths due to fire was reduced dramatically. These programs continue to this day and are copied by many cities throughout the U.S. and Canada.

As a result of his efforts, Commissioner Hairston was awarded 2003 Metropolitan Chief of the Year by the Association of Metropolitan Fire Chiefs. He also received the Fire Officer of the Year award from the National Burglar and Fire Alarm Association.

Commissioner Hairston was a proponent of higher and continuing education, having degrees from several universities. He also attended courses given by the FBI, ATF, and the National Fire Academy. He spearheaded a partnership with Community College of Philadelphia and Holy Family College to offer Fire Science and Fire Administration courses. He, along with the union, convinced the city to reimburse tuition for these courses. He didn’t stop there. Commissioner Hairston arranged to have representatives from the fire industry to give one-day courses at the Fire Academy. He was an advocate for continued training and as a result, many companies returned to the academy for refresher education.

During his tenure, he saw that EMS calls were out-numbering fire calls. Emergency medical calls had become 70% of the total responses. Hairston increased the department’s focus on EMS. He increased the number of medic and advanced life support units.

Commissioner Hairston came to discover that some of the local hospitals were charging insurance companies for the services rendered by EMS units. He led the effort to start billing for EMS services. He also lobbied city council to persuade them to give the department a portion of these proceeds to help maintain equipment and vehicles. Under his command, a computer system was launched so that medics could record their reports on a laptop on scene. Speaking of computers, he also was instrumental in computerizing the dispatch system.

Commissioner Hairston accomplished all of this in spite of massive budget cuts by the Rendell and Street administrations. He also weathered accusations of sexual harassment and racism.

Commissioner Hairston retired on July 29, 2004 after 40 years of service to the Philadelphia Fire Department and the citizens of the city of Philadelphia. After retirement, Hairston kept busy as a board member on many community organizations.

Former Commissioner Hairston passed away at his home, after a long illness, on November 1, 2016, and was buried in Ivy Hill Cemetery.