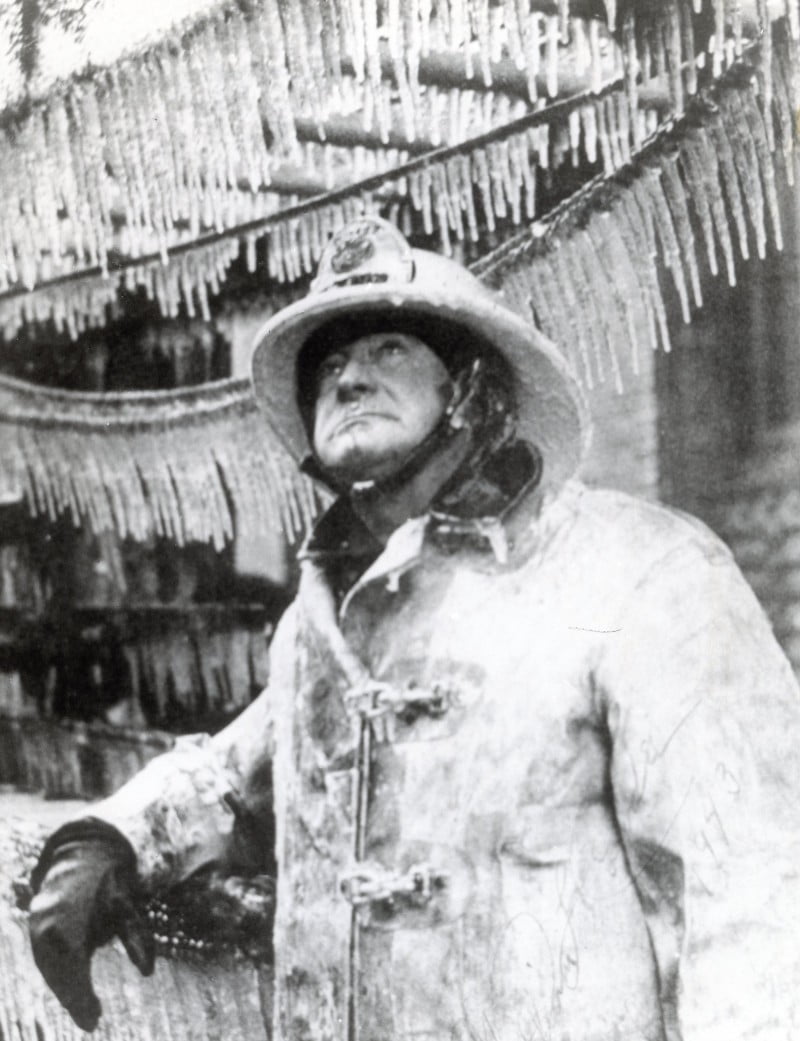 William F. Cowden was a 26-year-old bartender when he was appointed to the Bureau of Fire as a hoseman on April 16, 1907. His residence was listed as 4320 Filling Street in the 23rd Ward. Cowden was assigned to Engine Co. No. 14. He was promoted to Lieutenant of Engine Co. No. 27 on August 21, 1913 and promoted to Captain of Truck Co. No. 18 on July 1, 1917. On May 1, 1929, Cowden was promoted to Battalion Chief in the 9th Battalion. His appointment as Acting Chief Engineer came on April 1, 1941 after William Simmler declined the position in December 1940. Cowden’s provisional appointment was approved on June 3, 1941 by the Civil Service Commission and his appointment made permanent. He retired from the Bureau of Fire on January 1, 1947.

Prior to his promotion to Battalion Chief, Cowden had received six citations for bravery and was awarded a gold medal for numerous heroic exploits in his first twenty-two years of service with the Bureau of Fire. On July 18, 1913, his home at 1322 Unity Street was damaged when an explosion occurred at the Gray and Flynn bleaching works located at Factory and Unity Streets. He was injured several times in his career. On June 25, 1910, Cowden and another firefighter were injured when the roof of a two-story dwelling upon which they were positioned collapsed sending them into burning debris on the second floor. They were rescued by fellow firefighters and taken to Frankford Hospital with severe burns, bruising, cuts and internal injuries. He was also injured on December 12, 1920. Cowden suffered cuts and burns to his hands and arms when an iron door fell on him and two other firefighters while battling a blaze at Gates Candy Company at Norris and Howard Streets.

On the evening of May 4, 1946, at the Bureau of Fire’s 75th Anniversary dinner at the Bellevue-Stratford, Chief Engineer Cowden received the Inquirer’s gold Medal of Valor, representing the city’s 2,000 firefighters. The award recognized their “bravery, devotion to duty and sacrifices.” William Cowden retired on January 1, 1947 ending his nearly forty years with the Bureau of Fire. He died on May 24, 1971 at Saint Mary’s Hospital in Philadelphia at ninety years of age. His residence was 1204 Unity Street.

It should be noted that William Farnsworth Cowden was the first of four generations of his family to serve the City of Philadelphia as firefighters. In May of 1960, Mayor Dilworth congratulated Robert Cowden, a fourth-generation Philadelphia fireman. Robert’s father, William N. Cowden and his grandfather, William F. Cowden were present holding a photograph of Chief Engineer William Farnsworth Cowden, Robert’s great-grandfather.