Baxter became an active member of the Northern Liberty Hose Company in November 1864 and served with that company until he was appointed Foreman of Engine Co. No. 21 in the paid fire department on March 15, 1871. His occupation was listed as upholsterer and his home address was 934 New Market Street. He was promoted to Assistant Engineer in December 1871 and District Engineer on December 1, 1872. Baxter was appointed Acting Chief Engineer of the Bureau of Fire on August 7, 1892 and appointed Chief Engineer of the Bureau of Fire on October 13, 1892. He served in that position until March 1, 1911 when he retired as Chief Engineer due to age and injuries suffered over his long career. In December 1911, Mayor Rayburn requested that Director of Public Safety Clay and the councils create the position of Fire Inspector to be filled by James C. Baxter Jr. in recognition for his forty-six years of dedication and leadership to the fire service of Philadelphia. Baxter was appointed to the new position of Fire Inspector to which he held for the remainder of his life according to the ordinance passed by both councils effective from the day he retired as Chief Engineer.

Baxter was injured numerous times during his career. While on a working fire on St. John Street he was badly burned on the lower part of his body, the injuries being potentially life threatening. He was thrown from his carriage several times, hit by falling debris and buried by falling walls. He narrowly escaped serious injury in 1910 at the Friedlander Leather Factory fire when the front wall collapsed shortly after he entered the building burying him in debris and again while directing firemen from an adjacent third story dwelling roof when half the roof gave way when two other walls of the factory collapsed.

During his fire service career Baxter held several positions and memberships in fire related organizations. In late 1886 and early 1887, he was actively involved in the creation of the Veteran Firemen’s Association of Philadelphia and maintained his membership until the organization disbanded. In July 1890, he was elected vice president of the newly formed Firemen’s Pension Fund. He was later elected president of the fund.

A physically imposing figure, Baxter was listed as 6′ 3.5 inches tall, the tallest Chief Engineer in the Bureau of Fire.

Baxter resided at 918 New Market Street throughout his active days in the fire service. He sold this home in 1912, which was within 100 feet of the house where he was born (934 New Market). He then moved to 2409 Lehigh Avenue to live with his niece and her husband as he had lost use of his legs from injuries suffered during his career. 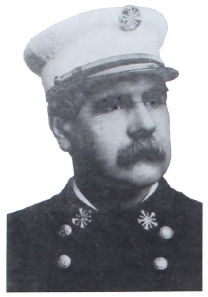 In 1965 the PFD News included an interesting article on Baxter. In this article it’s noted that he was the first to ride in a motor car, the Chief’s car, to fire scenes. The first automobile being purchased in 1907, Baxter was quoted as saying, ” the city should have purchased automobiles for the chief and fire marshals long ago. For the long runs were mighty hard on a horse.” Read the full article.